Posted on October 14, 2011 by LouiseMulherin 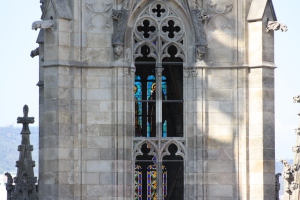 We’re in Barcelona where we leave tomorrow for our cruise on Oceania’s Nautica. We’re both fairly well traveled, but neither of us have ever been on a cruise. Our itinerary takes us from Barcelona to Rome, with the French Riviera and Amalifi Coast among the highlights along the way.

id a quick tour of some of Barcelona’s best sights & heights, including the Park Guell which offered spectacular views of the city. Despite my fear of heights, we took an elevator to the top of the Barcelona Cathedral & walked around among the scaffolding (repairs are in progress) for more great views.

One funny anecdote from the day. We were on the hop on/hop off tour bus and as we were driving through the port area we passed a huge yacht. The man behind us said “that’s somebody’s boat.” I turned & replied, “it’s ours.” The man said, “if that was your boat, you’d be on a private tour.” “All our money’s tied up in the boat,” Jeff deadpanned.

Here’s a picture of it, pretty sweet!

Our hotel is in the Port Olimpic, just across the street from what was the Olympic village for the 1992 games. We’re looking out at the Mediterranean, which we’ll see a lot of in the next 10 days. 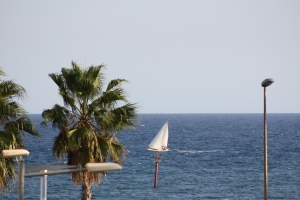 Writer & publicist doing my best to be kind to Mother Earth.
View all posts by LouiseMulherin →
This entry was posted in Uncategorized and tagged life is good, travel. Bookmark the permalink.